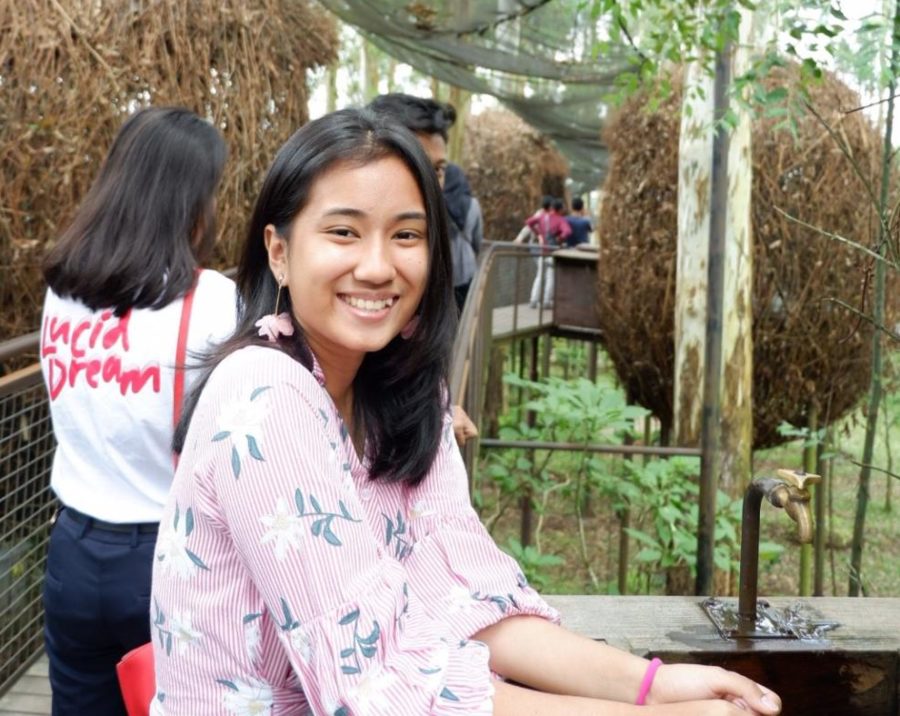 ved here for the school year. She decided to become a foreign exchange student because she felt she was expected to and her older siblings had done it, as well as wanting to take advantage of this “once in a lifetime opportunity.”

She describes her home as “very crowded and city-like.” There’s no scenery like here, and traffic is so bad there that she would have to leave school an hour early because it takes three hours to get home. It’s warm there and no wind. “The coldest it gets is, 71F and the hottest is probably like 95,” so she gets chilly here. It doesn’t snow in Jakarta, and she has never seen snow before. She’s excited for winter to come, so she can experience activities that she’s never had the chance to before–like sledding and making snowmen. She likes Seward because of how small a community it is, “everyone feels safe here and everyone knows everyone.” Parents don’t really have to worry as much here as they do in Jakarta.

Her school went from 6:30-3:30, and they had 16 subjects. They don’t get to pick any of their classes except whether to take either a social or science class. They have to wear uniforms, can only have two ear piercings, can’t wear makeup or jewelry, skirts have to be below the knee and socks have to go up to the hem of the skirt, shirts have to have sleeves. Boys have to wear loose pants, short hair, and the same type of shirts. They start out with around 120 points, and every time they misbehave or don’t follow the dress code, then they get points taken away. If that gets below a certain level, then they can get suspended or expelled.

One major difference she mentioned is in Indonesia you have to give people who are older than you different amounts of respect, depending on their age. A junior can’t call a senior just by their first name; they have to say “ca” and then their name. Kind of like we do with Mrs. and Mr., except instead of just one general word of respect, they have different ones for each age group. Whereas, people here don’t really care if you call them by their first name. She also grew up watching movies like Mean Girls, and says that it’s very different here than how the movies portray America.

She said that even though she can speak English well, it’s still difficult being a foreign exchange student because speaking it conversationally is quite challenging, in addition to learning new subjects in a completely different language.

She thinks she might want to study in Japan during her college years, but her exchange here has made her think about how hard it might be, being in a totally different environment with no one responsible for her. “Seeing my exchange here, it’s very hard when you live in a different country without your family.”

It’s impressive how well she has adjusted, moving all the way from the largest city in Indonesia to small-town Seward, Alaska. She has had to learn a new language, adjust to our very different culture and environment, and do all this while being completely separated from her family. I don’t know many people who would have the courage to do that.