What Truck is Best Truck

What truck do you buy? 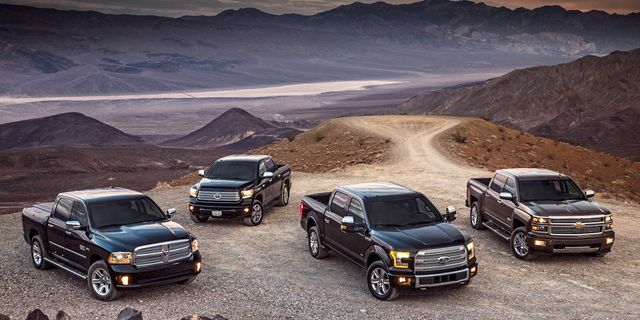 Here in ‘merica, it seems like trucks represent half of the vehicles on the road. With the top 10 best-selling vehicles all being pickup-trucks, everyone in the state knows someone with a truck; assuming they don’t have one themselves. If you are one of the scumbags who is always asking their mom’s co-worker’s aunt if you can borrow their 1984 Ford to take out the trash, just buy one for yourself ALREADY!  No matter how many homemade dreamcatchers you give them, or how many times you offer them your Chevy Cruze for the day, it does not make up for the fact that you always return it smelly and dirty and with a half tank of gas.

So what truck do you buy? This article might help you decide. Or it might make you irrationally angry because someone on the internet had the AUDACITY to disagree with you on a subject that neither of you have any real stake in. So here are my opinions on some of the trucks that are currently being produced. If I missed your favorite, I don’t care and you probably shouldn’t buy it.

The best-selling vehicle in America for 35 years and running. An F-150 is a truck with an image of being “a good old boy.” The F-150 gets unnecessary hate for being on top. When you make 250,000 more trucks than Ram or Chevy every year, there will be more trucks broken down, even if it’s just as reliable. An F-150 is a truck for someone who wants to take the kids to soccer then go offroading with your high school buddies. You buy this truck if the most exciting thing in your life is that time in 4th grade when your mom almost slid off the road. Ford F-150: The truck that screams “Vanilla is my favorite ice-cream flavor!”

The second best-selling vehicle in 2020, the Silverado is the F-150’s edgier rival. Chevy lovers are the most patriotic of folk. They don’t drink lite beer and they wear exclusively wife-beaters during the month of July. Peop

This truck rounds off the top three best-selling vehicles in America. A Ram 1500 is the official truck of the words Yee Yee.   A Dodge Ram is for cowboy boots and parking lot burnouts. Ram 1500s are the most abused trucks in every way possible. Every trade-dad in the county has a Ram 1500. When their YouTube-raised son gets his license, he takes the truck out to be the next Ken Block. You buy this truck to try and fix your marriage after your wife figures out that you’ve been selling your 12 year old’s toys to buy Milwaukee tools. Dodge Ram 1500: Complaining about back problems before you finished puberty.

The Ford Super-Duty is a lot different than the F-150.  A Super-Duty is for the classiest truck owners (oxymoron, I know). Super-Duty drivers all have folders on the home screen of their iPhone. They plan their route based on which gas station has the cheapest Dr. Pepper and the toughest straws. The Ford Super-Duty is for people who complain about masks but still wear them to avoid conflict. The glovebox ALWAYS has a first-aid kit and bottle opener. Ford Super-Duty: The truck you buy if you read the instructions before setting up a TV.

The Ford F**** Ranger. For people who wanted a diesel, but needed a Camry. Nobody with a Ford Ranger NEEDs a truck. They just want a conversation starter and something to pull their 4×6 enclosed trailer full of camping supplies and AC/DC records three times a year. Your old room in your parent’s house gets used more than the bed of a Ranger. Rangers are the status symbol of a truck, so you buy one. It’s like those “Live Laugh Love” pictures you see in the bathroom of your aunt’s house. Every time you see it, you think you should get one, but as soon as you leave, it disappears from your mind completely. Ford Ranger: Asking people if they are ready to “Rock n Roll” after dinner at Red Robin.

There are two possible reasons you buy a Chevy Colorado. Either your dad said “Fix Or Repair Daily” once when you were seven, and now your hate for the blue oval is only matched by your resentment towards brussel sprouts. Or you wanted a Dodge Dakota and this was your second choice. People who buy Colorado’s are people who go vegan for attention. They will argue both sides of a political topic depending on whom they’re talking to. This truck is for those who have nobody to invite over for dinner but will sit at the bar and talk about all of their friends to a total stranger. Chevy Colorado: The official truck of asking people about their day, so you can talk about your own.

The Toyota Tundra is like an F-150 without anything that makes an F-150 great. It’s like “incogMEATo.” You think it’s cool and will be great, but then you bite into it and there is no substance. It’s a truck. That’s all I can say. If it was a spice it would be flour. Nothing about this truck stands out. The Tundra is for people who wear Khakis to a day out on the town. Tundra drivers work in accounting for a mid-level toothpaste company. People who buy a Toyota Tundra have never seen mud and go mini-golfing then post it on Facebook. Toyota Tundra: The truck that makes waiting rooms look interesting.

Flannel to a Tacoma owner is like bleach to Michael Jackson. In some states it is actually against the law to drive a Tacoma without owning Patagonia underwear. A Tacoma is for the most active people, and the people who talk about their activities the most. Did you know that 100% of Tacoma owners will tell you what they did last weekend within the first 3 minutes of a conversation? Nothing says “I drink seltzer water” like a Tacoma. If you live in Colorado and don’t get excited when you see a Tacoma, you probably like unbuttered popcorn from the movie theater. Toyota Tacoma: Telling people that you would rather take the stairs “for cardio.”

The Honda Ridgeline gets a lot of hate as a truck. It’s like going to the store for steak and coming home with nacho cheese and pudding. Is it a good truck?

No. But the Ridgeline is a good vehicle. It has all of the comforts of a minivan, and a bed. The Honda Ridgeline is a truck for someone who is conscious enough to know they don’t NEED an $80,000 1-ton turtle killer. But who knows that a Rav-4 wouldn’t have enough room to haul everything to the cub scouts event. Honda Ridgeline: For people who know that their wife took their manhood and don’t try to fight it anymore.