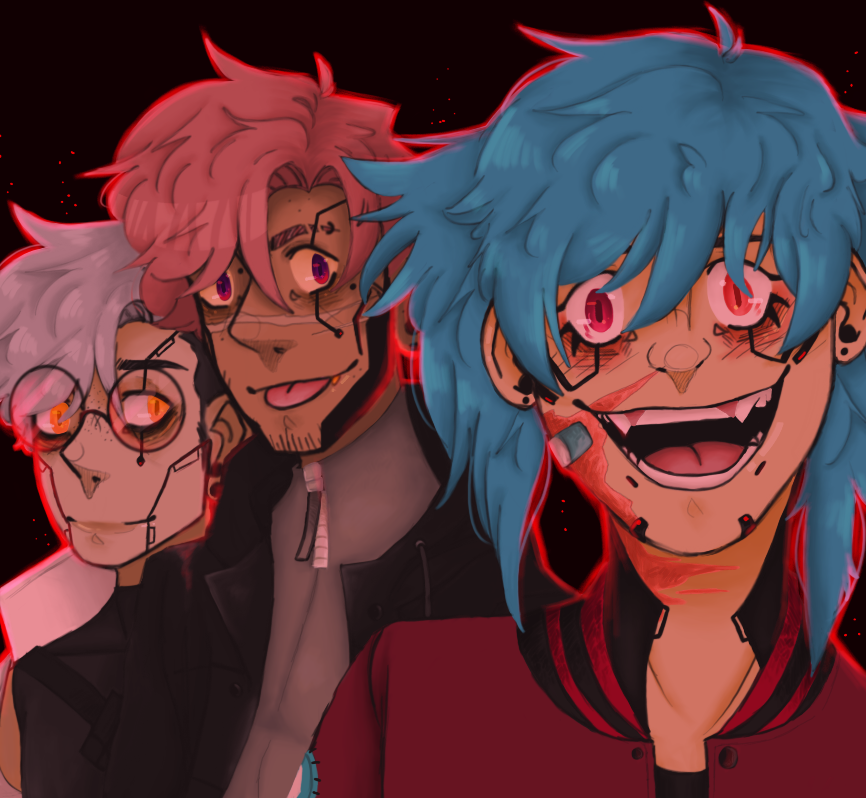 It’s been thirty years since the “end,” since things went bad. Whoever survived adapted to how the world runs now. The survivors then joined groups or families as we call them, and that’s the safe thing to do. You’re considered dead if you go out in this world by yourself. Believe me, I wanted to be on my own as well, but after some mishaps, I changed my mind. I had some tagalongs follow me for a while, so I decided to give a family a chance. Ever since then, I’ve been stuck with these two um…rascals.

The kid with blue pigtails is Seven; don’t mess with her, and she won’t bite your arm off. I mean it, she is…odd to say the least. She does have a sweet side to her, though, and can be very caring!! Just most of the time she’s absolutely bonkers. She’s one of those kids that’s been made to kill, so that explains a lot. I met her when she was ten years old, and she found me when I was on my way to this city.

Then the pale dude with the glasses is Robbie. He’s quiet and has some attitude, but is one heck of a fighter and the brains of the group. Robbie is my best mate; he always has my back, and I always have his. I met him when he used to work for one of the best mechanics in the city. He was always the one fixing my old car, so we spent a lot of time together.

Last but not least, is me. Hey there, the name is Jonathan! I’m the protector of the group and try my best to keep us out of trouble, but that doesn’t always happen. I mean, what do you expect? We do anything to survive, that’s just how things work here.

That’s just how life is: either keep up or get left behind. Welcome to the Cyber Wasteland!